Group of girls in al-Hol’s foreigners’ Annex during a ‘graduation ceremony’ under ISIS banner (see below).

Sleeper cell violence continued at a similar rate to last month’s, with 25 attacks, of which 18 were confirmed to be ISIS attacks, in June (in May, it was 26 and 14, respectively). Outside the camps which house ISIS-linked members, sleeper cell violence killed 14 and wounded 5 security force members, and killed 2 civilians. In May, 6 security force members were killed and 4 wounded, while 7 civilians were killed and 4 were injured. Notably, 2 of the killings of security force members in June were conducted by smugglers, unrelated to ISIS, during a raid near Kobane. In its largest attack in June, ISIS ambushed a car carrying members of the al-Sanadid forces in the southern Jazira region on the 26th. Al-Sanadid, a long-time ally of the YPG/YPJ, was formed by members of the Arab Shammar tribe in order to fight ISIS in 2013. The attack killed 3 of its members and wounded 4 others.

Two-thirds of all ISIS attacks were centred around the Deir ez-Zor region (7 out a total of 11; up from 5 in May). According to a Global Coalition source, in one notable instance, local Deri residents and the SDF collaborated in order to defend against an ISIS attack on the villages of Jadeed Akidat and Jadid Bakara on June 14th. According to the source,

“civilians from the cities of Jadeed Akidat and Jadid Bakara. aided in thwarting an attempted attack on their homeland by ISIS cells. As ISIS members advanced, the locals quickly set up roadblocks and obstacles to slow their the advance. The SDF and Deir ez-Zor Military Council members arrived and valiantly fought them off with the continued support from the civilians.”

On the 18th, ISIS cells shot at the house of an oil contractor in Busayrah. The shooting did not cause any casualties, but is evidence of the continuing pressure the jihadist group is putting on the oil sector in Deir ez-Zor. The group accused the man of not paying zakat (a term for compulsory almsgiving within Islam) which ISIS uses to cloak the protection money it extracts from local oil sector companies. In addition, tribal violence, unrelated to ISIS, killed 17 people and wounded at least another 17 throughout June. 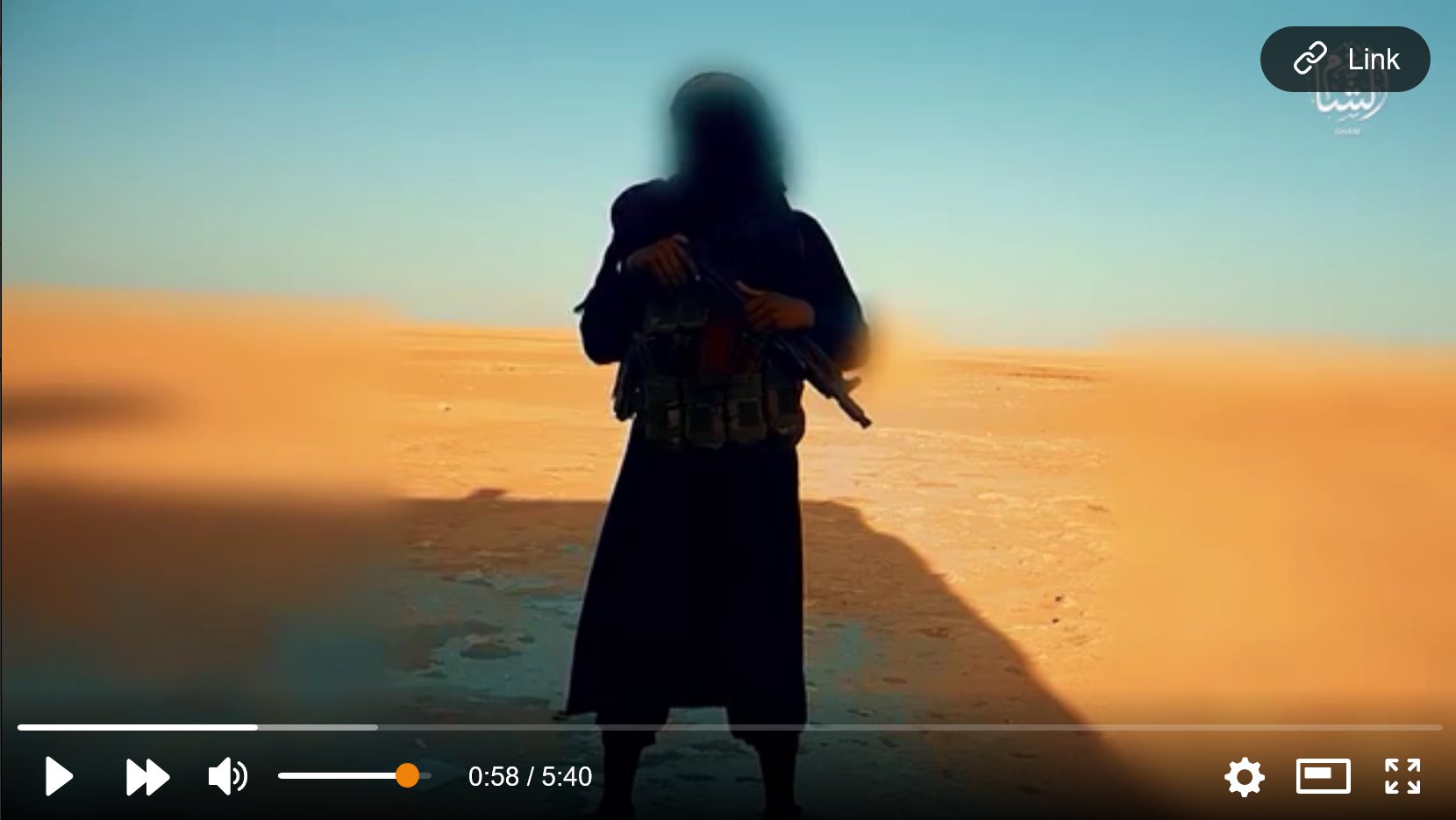 The number of raids and arrests did not differ drastically from last month, though it appears the SDF and Global Coalition were able to arrest more high-ranking members in June. Overall, security forces conducted 25 raids (15 with Coalition support), which led to the arrest of at least 50 people and the deaths of 11 ISIS suspects. On June 25th, a joint SDF/Coalition raid in al-Saqqar, north Deir ez-Zor, killed 4 high-ranking ISIS officials, one of which had appeared in one of the group’s propaganda videos only two days prior (pictured above). On June 14th, a Coalition raid reportedly arrested a major figure in ISIS Syria branch near the city of Jarablus, mere kilometers from the Turkish border (not reflected in RIC’s statistics). A Coalition drone strike in Idlib furthermore killed an al-Qaeda-linked leader of the ‘Hurras al-Din’ militia on June 25th.

The SDF conducted raids in the city center of Raqqa on the 18th and 19th amidst rumours of an ISIS prison breakout, similar to that of Heseke in January. The SDF officially denied this was the case, calling it “precautionary security measures.” Some media reported 3 ISIS-linked detainees had escaped but were immediately re-arrested (these arrests are not reported in the overall count). On June 1st, AANES-linked media released the interrogation videos of 3 suspected spies and former ISIS members, claiming that they were working for Turkish Intelligence and the Kurdish nationalist opposition. Earlier in the month, Asayish forces raided the Mahmoudli IDP camps near Raqqa, searching for ISIS operatives. They arrested 7 suspects. Another raid in Hol camp yielded at least 16 arrests.

Yet violence in Hol camp continued unabated throughout June, though it was especially pronounced in the latter half of the month, when 6 of the 8 murders were carried out and 1 other person was wounded. In mid-June the camp’s administration warned of an ISIS insurgency should Turkey carry out its threats to invade North and East Syria. ISIS-linked women in Roj camp – a smaller camp, holding around 2,310 mostly-European ISIS-linked women and children – set fire to their tents. No casualties were reported as a result of this attack. Towards the end of June, a video surfaced showing young niqab-clad girls attending a ceremony held by Russian-speaking women under an ISIS banner in Hol camp’s Annex. The girls appear to be receiving diplomas. As the camp’s administration tells the RIC, education in the Annex – which holds foreign ISIS women and children – is almost entirely in the hands of the women, who proselytize ISIS’ ideology.

We may request cookies to be set on your device. We use cookies to let us know when you visit our websites, how you interact with us, to enrich your user experience, and to customize your relationship with our website.

Click on the different category headings to find out more. You can also change some of your preferences. Note that blocking some types of cookies may impact your experience on our websites and the services we are able to offer.

These cookies are strictly necessary to provide you with services available through our website and to use some of its features.

Because these cookies are strictly necessary to deliver the website, refusing them will have impact how our site functions. You always can block or delete cookies by changing your browser settings and force blocking all cookies on this website. But this will always prompt you to accept/refuse cookies when revisiting our site.

We fully respect if you want to refuse cookies but to avoid asking you again and again kindly allow us to store a cookie for that. You are free to opt out any time or opt in for other cookies to get a better experience. If you refuse cookies we will remove all set cookies in our domain.

We provide you with a list of stored cookies on your computer in our domain so you can check what we stored. Due to security reasons we are not able to show or modify cookies from other domains. You can check these in your browser security settings.

We also use different external services like Google Webfonts, Google Maps, and external Video providers. Since these providers may collect personal data like your IP address we allow you to block them here. Please be aware that this might heavily reduce the functionality and appearance of our site. Changes will take effect once you reload the page.